=-O How did that happen?! As a club with no clear strategy or captain (although we did have a banner which was more than many) we somehow managed to rack up enough points at Tentsmuir to come 3rd in the Trophy class (small clubs) and a mere 6 points behind arch-rivals Maroc. Result!

It’s a team competition so you need strength and depth across a variety of age classes/courses, so potentially anyone’s score could be the deciding factor between placings.
Tentsmuir’s an area well suited to such a broad variety of competitors with a grid of forest blocks, some of which have small patches and ridges of highly complex contour detail for the TD5 courses. The blocks seem ridiculously easy at first glance but lulled one or two of us into a false sense of security and caught us napping.
Thanks to all 31 Gramps who ventured down and particularly to our 13 highest scorers shown in bold below.

This now means that we’ve qualified for the CSC final down in Devon 22/10/17 at the intriguingly named area, Virtuous Lady – fancy an Autumn break anyone? FlyBe will get you to Exeter via Manchester for a mere £180! 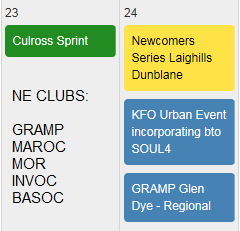